How to Confront Adversity 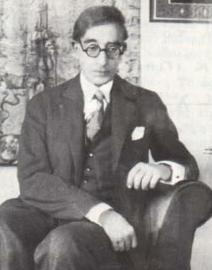 The Year 2013 has been declared as “THE YEAR CAVAFY.”  150 years have passed since the birth of the poet, 80 years from his death, and the whole world celebrates his contribution to literature and humanity.

Constantine Cavafy was an early 20th century Greek poet from Alexandria, whose many poems reflect a deep fascination with History, Mythology and Cultural Experience; all these, he uses in his poems as literary metaphors illuminating the present and helping us to understand ourselves.

In this presentation, we will look closely at his poem:
“The God Abandons Antony.”

We will explore the historical background of the fall of the Roman general Marcus Antonius as the Octavian forces closed in on him in the Alexandria of Egypt, fact which caused him to commit suicide in 30 B.C. We will observe Cavafy’s technique in turning this event into an archetypal human experience, and we will see how the poet seizes this opportunity in order to offer meaningful and powerful advice to both the Roman general and to us on what is:
“a better way of confronting adversity.”